He is the author of two previous critically acclaimed books about the Senate: The Last Great Senate: Courage and Statesmanship in Times of Crisis [2012, nominated for a Pulitzer Prize] and Broken: Can the Senate Save Itself and the Country? [2018]

The highly timely publication of The Betrayal is already sparking conversations. Be sure to attend and listen to these upcoming events and interviews — 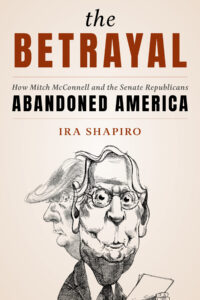 How Mitch McConnell and the Senate Republicans Abandoned America

The Founding Fathers gave the U.S. Senate many functions, but it had one fundamental responsibility—its raison d’etre: to provide the check against a dangerous president who threatened our democracy. Two hundred and thirty years later, when Donald Trump, a potential authoritarian, finally reached the White House, the Senate should have served as both America’s first and last lines of defense.